Every once in a while we are surprised in our daily routines and ordinary lives by a reminder that wild animals live all around and even among us.  Although we might not see them every day, they probably see us but we’re just a part of their environment. They don’t pay a lot of attention to us—sometimes to our dismay and their injury—and go about their daily routines of finding food, reproducing, and avoiding becoming food.

Yesterday I was returning from a shopping trip to Trader Joe’s and tootling along a back road in Framingham. Suddenly a hawk swooped in front my car, very low to the ground. She was a beautiful blue-gray color, unlike the more common brown-and-white hawks.  I slowed down and turned to discover what had attracted the bird only to see a completely unexpected drama unfolding. 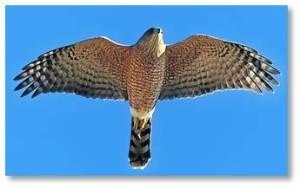 Sharp-shinned hawk on the wing

I should have stopped the car and taken a video but I think that would have disturbed the hawk and robbed her of dinner. So I kept going and have no idea which side won.  Did the hawk go hungry or did the squirrel provide a furry dinner?  I’ll never know.  But there are more squirrels than sharp-shinned hawks so I hope she was successful. Everybody has to eat.

Last night Seth had an encounter with a white-tailed doe as he was driving home: another reminder of the wildlife around us. Last year a multi-point buck jumped a fence and landed in the street right in front of my car.  I had time to stop and watch him as he stood there, predictably, like a deer in the headlights and count the number of points on his rack (five) before he recovered and dashed into the woods. 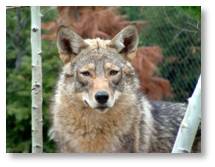 I’ve written about the doe that was taken down by coyotes on the frozen pond behind our house in Sudbury as well as the coyotes, turkeys, fisher cats, and other critters who live near our condominium community.  Each sighting gives me an opportunity to stop and wonder at their beauty, their wildness, the way they ignore humans as irrelevant to their existence.  Each encounter is somewhat magical—a communication from a parallel world close to but outside of our own.

When I got home I went to the Audubon Society website, enature.com, to identify the beautiful bird who had brought magic to my day. The color and the dark bars indicate that she was probably a sharp-shinned hawk: the guide says that they use “rapid, agile, low-level flight to catch small songbirds in surprise attacks.” Clearly they don’t stop at preying on songbirds as the frantic red squirrel could attest. It also tells me that the female of the species is larger and this was a pretty big bird.

This isn’t the first time I’ve witnessed a real-life version of “When Birds Attack.”  When I worked at Q1 Labs in Waltham, my office was on the lower level and looked out onto a small landscaped area with three cherry trees. Behind that the ground sloped up to the parking lot. It was pretty but dull, with nothing interesting to see. So I hung a bird feeder from one of the trees. Every morning I would turn on my computer and, while it booted up, go out to fill the bird feeder and then return to start my day. While I worked, I was treated to a wide variety of brightly colored songbirds coming and going.

One afternoon a flurry of movement caught my eye and I looked out to see a hawk, probably a Cooper’s Hawk, drop onto a male cardinal and pin him to the ground.  To my shock, the hawk then pulled the cardinal apart while I watched and ate him in pieces right there. It didn’t take long.

A Feast for Crows

Years before that I worked for Chipcom when we had two buildings on Route 9 in Framingham. The buildings were connected by a covered walkway that had partial walls on the sides, open at top and bottom.  My office window looked out on the walkway and I noticed a large crow staking out a spot on the other roof. It was a tough, cold winter with snow falling almost every other day and the ground was hidden beneath feet of the white stuff. Not much was moving in the woods — or getting run over on the roads — and that crow was hungry.

Sparrows would fly down and search the walkway for crumbs that had fallen from cafeteria trays and snack bags. One day I saw the crow fly down toward one of the sparrows who was near the side of walkway where it was open. I watched as the sparrow hopped away from the side and out of easy reach. The crow flew back to his perch. The sparrow, oblivious, made another foray toward the side and this time the crow was faster.  He plunged down and nailed the sparrow on his long beak, then flew back up to the roof to eat his lunch undisturbed.

In both cases, the attacks were so fast, so unexpected, so fatal, that I was shocked out of my everyday routine. It felt the same yesterday. I saw, quite abruptly,  a touch of the wild and a possible death in the afternoon. It’s all in a day’s work for a hawk but it was a touch of magic for me.