Salutation:  n. 1. A polite expression of greeting or goodwill. 2. A gesture of greeting, as a bow or kiss. 3. A word of phrase of greeting.

That seems clear enough. But why name a whole street for such an expression of bonhomie? At a time when we as a nation could use more goodwill, I thought it would be interesting to find out.

A Street of Contradictions 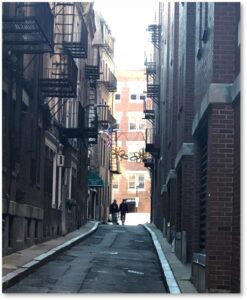 Boston’s Salutation Street is a street of contractions. It’s a short street with a long history, named for goodwill but with a history of violence, and a narrow street where people gathered to think widely and share radical ideas.

Salutation Street runs one short block from Commercial Street on the waterfront to Hanover Street in Boston’s North End. About one car wide, Salutation Street retains the dimensions of Boston’s original lanes, which were big enough to hold a carriage going one way. Like many of the streets in old Boston, it took the name of a structure on it that was a destination, in this case for many of the city’s menfolk and political agitators. 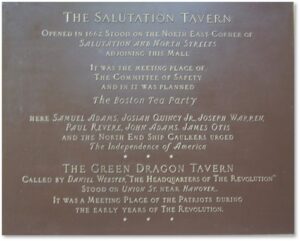 “It was the meeting place of
The Committee of Safety
and in it was planned
The Boston Tea Party
Here Samuel Adams, Josiah Quincy Jr., Joseph Warren,
Paul Revere, John Adams, James Otis
and the North End ship caulkers urged
The Independence of America”

The Salutation Tavern stood on the northeast corner of Salutation Street, which puts it approximately where a hair salon now exists. It must have been profitable establishment because it changed hands a surprising number of times.

Who Owned the Land

James Smith first acquired the land early on and sold it to Christopher Lawson. He, in turn, sold the land to William Winbourne in 1644, who later conveyed it to John Brookings in 1662.  Brookings opened a tavern on the site in that year. The Salutation Tavern continued its peripatetic ownership—which at one time included Governor Sir William Phips. 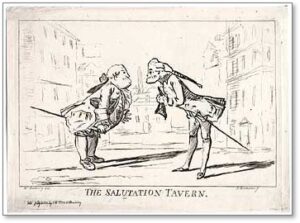 As the historical marker located in the Prado across the street says, the Committee of Safety met at the Salutation Tavern to plan the Boston Tea Party. When the number of attendees grew too large for the establishment to hold, they moved to the Green Dragon Tavern, located a couple of blocks away and behind the Old North Church on Unity Street.

The inn had a humorous sign that showed two citizens with hands extended bowing to one another with exaggerated courtesy. Residents of the North End gave it the nickname of “The Two Palaverers” and the tavern became commonly known by that name.

Because of its location near the shipyards, the Salutation Tavern counted among its clientele the shipping industry’s workmen, among them shipwrights, caulkers, gravers, and spar-makers, as well as workmen from the ropewalks and docks. Strong patriots, these men tended to think and move as a body. Smart politicians, like Samuel Adams and Gov. Phips, understood this bloc loyalty and used it their advantage.

NOTE: The word “caucus” might possibly have originated in these meetings, perhaps as a contraction of “caulkers’ meetings.” It also could go all the way back to the Algonquian word “caucauasu “meaning counselor, elder, or adviser. Or even further back to Ancient Greece.

In the Salutation Tavern, prominent Whig politicians met and mingled with these shipyard workers. More than sixty attended the first meeting in 1772 at which Dr. Joseph Warren drew up a code of by-laws. San Adams and John Hancock often attended to plot the downfall of the royal government. A leading workman was chosen to lead the caucus meetings. After the Tea Party they transferred the meetings to the Green Dragon Tavern on nearby Union Street.

Italian anarchists, the terrorist bombers of their day, claimed responsibility for the violence as a reprisal against the Boston PD for the arrests of several anarchists during an anti-war riot. The Galleanist Alfonso Fagotti was arrested for stabbing a policeman during the riot, which took place in North Square.

Ten demonstrators were arrested, including the anarchist leader Mario Buda. The bomb went off a few weeks later. The bomb blew a hole through the three-foot brick wall of the police station and broke every window for blocks. Three policemen sleeping in a room directly above the cell in which it exploded were lucky to escape with their lives. Only the fact that t

Salutation Street is quieter today. It’s still narrow, thought, so if you walk down it, watch out for cars. If one comes along, you’ll have to step onto an equally narrow sidewalk to be safe. As far as I know, however, no one is preaching violent rebellion there these days, so you can make it to the other end in one piece.