Last weekend I was preparing to lead a Boston By Foot tour of the Victorian Back Bay—and I was hungry.  The small, healthy lunch I had eaten before leaving home had disappeared before I reached Boston and I had at least two hours of meeting my tour group and taking them around before I could think about getting dinner.

Hmmm. What to do? 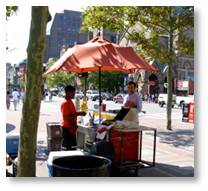 I like to support local businesses so my first thought was to grab a quick hot dog from the vendor who usually stakes out the corner of Dartmouth and Boylston streets in the summer. But Big Daddy must have gone away for the holiday weekend because no hot dogs were available on Saturday afternoon.

That left Fast Food Nation. Fortunately, there are many fast food restaurants on Boylston Street opposite Copley Square.  I didn’t have time for a sub or a burrito so that eliminated Firehouse Subs, Boloco, and the Bon Me food truck from consideration.  I was left with a quick burger from either Burger King or Wendy’s.

Hmmm. Which one to pick?

Ordinarily, this would be a simple choice made on food quality and price, but this time current events and economics played a role.  Wendy’s has its headquarters in Dublin, Ohio, right here in the United States.  Burger King, on the other hand, has just completed a tax inversion deal to acquire the Tim Horton’s doughnut-and-coffee chain. It will then move its headquarters from Miami to Oakville, Ontario, in order to pay Canada’s lower corporate tax rate.

Now I understand that a company’s management has a fiduciary responsibility to its shareholders to minimize expenses and maximize profits. But I also understand that the taxes BK has been paying to the United States government will have to be made up by other tax payers—many of whom are also @BurgerKing customers.  This does not sit well with me. 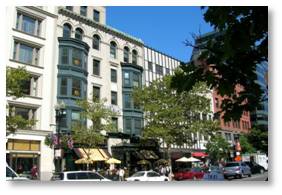 The Tim Horton’s acquisition—a whopper of a deal done for tax avoidance—was financed to the tune of $3 billion out of the total of $11 billion by Warren Buffet. Now, Mr. Buffet famously has two rules:

OK, I get it. If BK leaves the United States, taking its corporate taxes with it, then I lose money because I’m one of the people who will have to make up the difference. Yes, I know that my minuscule fraction of that amount doesn’t add up to one small French fry but the principle applies. Never forget rule No. 1.

Thing 1: Burger King stock has dropped since the acquisition was announced but @TimHorton’s stock has risen. So investors seem to be seeing it my way.

Thing 2: Because of the terms of the deal,using preferred stock instead of a bond, Mr. Buffet is the one bringing home the Canadian bacon.

Thing 3: BK executives have dismissed the potential tax savings and have said that the fast food chain will keep paying the same taxes in the U.S. that it has been. I’m not sure how that works once BK’s HQ has moved to Canada. But perception is reality and my perception is that they are dodging U.S. taxes.

Wherever the beef might be, something smells fishy about the whole thing—and it’s not a Big Fish sandwich in the Fryolator. On Saturday I had a bad feeling about Burger King (one might say I wasn’t satisfried) and I wasn’t about to support them with my money. 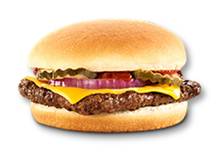 The choice was simple: I went to @Wendys.

And I got a nice surprise. (I don’t eat much fast food.) The burger was better. It even looked like its picture.  And I was still full even after the tour was over.