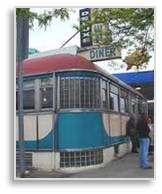 Yesterday we had a late lunch at the Deluxe Town Diner in Watertown, one of our favorite places for an outstanding breakfast as well as for casual dining the rest of the day.  The food is better than standard diner fare and what other place has an entire menu just for tea? Then we went for a long walk in Mount Auburn Cemetery.  That may sound morbid but Mount Auburn was founded in 1831 as the nation’s first garden cemetery, replacing the old, overcrowded, city churchyards.  It was designed for the living to enjoy as much as for interment of the deceased.  The 174 acres of rolling, beautifully landscaped terrain are planted with many varieties of trees and shrubs as well as flowers.

All the trees and most of the shrubs are marked with their Latin and common names (i.e., Acer Saccharum, Sugar Maple) for easy identification and all the roads and lanes are named after plant life (i.e., Kalmia Lane, Primrose Path).  On any pleasant weekend, it is crowded with people walking, pushing strollers, running, birdwatching, and taking photographs among its lakes and hills.  People even take wedding photographs here. 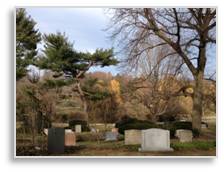 Yesterday we saw mostly bulbs (crocus, snowdrops, and scilla) in bloom as well as one wildly optimistic azalea and a few andromedas.  In places, there were carpets of vibrant purple scilla and white snowdrops.  Even though the weather has been cold, buds on the trees were swelling, giving a hazy green and pink aura to some of the landscape.  The waterfowl had returned to the lakes but we didn’t see any hawks or herons, which are commonly spotted here.Among the 93,000 people buried in Mount Auburn are nearly 200 notables of the nineteenth and twentieth centuries.  And because Boston and Cambridge were much smaller cities when the cemetery was opened, you can be sure than anyone with a familiar-sounding name was related to the more famous person is some way.   Visitors can pick up a map at the front gate (a massive Egyptian Revival structure) that shows the locations of plots where famous people are buried so you can go on a scavenger hunt of sorts, trying to find your favorite writer, artist, historical figure, or politician.

While there may be equality in death, there certainly is not in the memorials raised for these folks.  Winslow Homer, for example, is just one name on a large but undistinguished family stone.  It’s plain gray granite, which seems like a cruel joke for someone whose whole life was based on the beautiful use of color.  Oliver Wendell Holmes has his own simple marker but Mary Baker Eddy, founder of the Christian Science church, rates a Greek temple on the shore of a lake. Mount Auburn is also a sculpture garden, with statuary designed by the likes of Augustus St. Gaudens, and a Civil War memorial that is a full-size granite Sphinx.   The Washington Tower gives a panoramic view of Boston and Cambridge if you climb its fairly dim and echoing spiral staircase to the top.  Not all of the structures are historical, though.  This Buddhist stupa was raised in 2010 in place of a tombstone.  I only wish we could have read the prayers on the plinth. 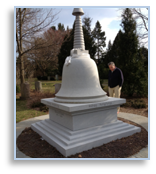 Over an hour of walking helped us burn off some of the calories we ate earlier (great cherry pie) and we headed home tired but happy.  The burial service in the Book of Common Prayer says, “In the midst of life we are in death.”  At Mount Auburn Cemetery, death is surrounded by life—the new life of growing things reaching toward the spring sun, the returning life of birds migrating north and turtles emerging from hibernation, and the ongoing life of people who come out to enjoy such a beautiful place.