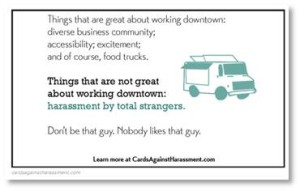 Recently Lindsey (Last Name Not Disclosed) made headlines and Facebook and Buzzfeed with her Quixotic attempt to educate men who harass women on the street. CBS This Morning did a segment on her efforts this week. Not only does Lindsey confront the men who offer her unwelcome attention, she hands them one of her Cards Against Harassment that tell them “Nobody likes that guy. Don’t be that guy.”

Now, I understand what motivates Lindsey to do this. Pretty much every woman, regardless of age, size, or appearance, has experienced this kind of harassment. Having gone to college in Boston and worked in Manhattan for nearly four years, I have heard my share of street comments. A few weeks ago I went for a walk in a suburban section of Anchorage and got woo-hooed by guys driving past in a Jeep—and I’m a grandmother. Some of the comments I heard were funny while others were scary, some were complimentary but many were deeply creepy.  All were unsolicited on my part. Most of them—about 99%—did not make me feel better. None of them made me feel safer. 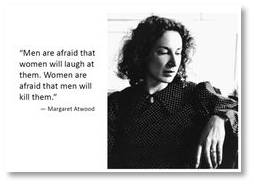 I have no doubt that some of the construction workers would have come to my aid had I been attacked while I’m equally certain that many of the cat-callers and whistlers would have been happy to act on the urges they were so happy to describe. The problem is that a woman can’t tell which are which. As author Margaret Atwood once said, “Men are afraid women will laugh at them. Women are afraid that men will kill them.”

So while I support Lindsey in her efforts I fear that she is going about it in a way that is not only doomed to failure but dangerous and likely to make her a target. She knows this; why else would she keep her last name a secret?

At heart, I think her efforts won’t succeed because confronting these men is giving them exactly what they want—the attention of a pretty woman. Consider the lyrics of Roy Orbison’s “Pretty Woman” and you’ll see what I mean:

And then there’s “Blister in the Sun” from Violent Femmes that says:

“When I’m out walkin’, I strut my stuff — yeah, I’m so strung out
I’m high as a kite; I just might stop to check you out”

These men are like the people at the zoo who tap on the snake cage despite the sign that says “Do not tap on the cage.” They want to wake the snake up so it will move. All the snake wants to do is sleep but they want it to perform for them and pay attention to them. So by talking to these men and handing them a card, she is doing exactly what they want. Her efforts will not change the men or the actions.  She may make them worse. After all, they got her attention this time so maybe the next woman they harass will stop and notice them.

Why Do They Do It? 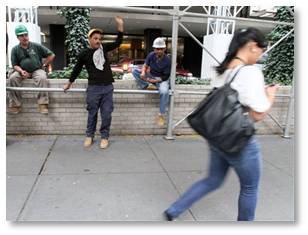 The reality, of course, is that nothing a woman does actually stops these men or even gives them pause. If you smile at them, swear at them, or flip them the bird, they see it as encouragement because it’s giving them your attention. If you ignore them, they redouble their attempts to get your attention.

It’s a lose-lose situation for any woman who just wants to walk down the street minding her own business. That’s why a lot of women, me included, will cross to the other side of the street to avoid a group of men. Imagine a man doing that because there’s a group of women on the sidewalk ahead. Hah.

Wanting to Be That Guy

Clearly a lot of men want to be “that guy.” Why do they do it? Probably for a lot of reasons:

Consider the two song lyrics and think of it from the woman’s point of view. Did Roy Orbison really think his pretty woman was just walking the streets hoping that a jerk standing on the sidewalk would ask her to have sex with him? And that she would actually turn around and take him up on the offer? Do you see what’s wrong with that concept? In the latter case, do the Violent Femmes think a woman would find it a compliment when a loser who’s totally wasted and can’t sing on key would check her out? Oh, yeah, that would make our whole day. 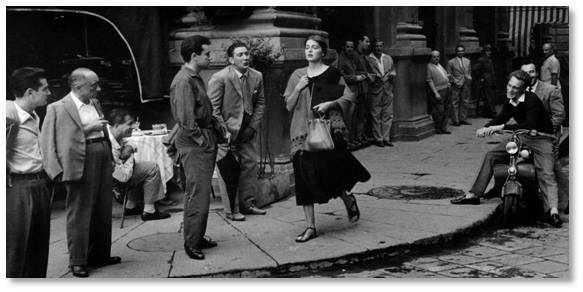 This is a famous poster of street harassment–decades ago

Does Anything Stop Them?

It’s clear that men don’t really get how women feel about this whole issue. A lot of men don’t even understand that it happens—at least to the women in their lives. That’s because it doesn’t happen when they are out with their wives, mothers, sisters, daughters and even grandmothers. The only thing that stops street harassment is other men.

Once I was on a business trip to Manhattan with my boss and a co-worker, both men. We checked into our hotel in Midtown on Seventh Avenue and I realized that I had forgotten to pack something. While they headed to the bar, I went out to the neighborhood Duane Reed. It was only a two-block walk but I picked up a few comments on the way there and back again. When I joined the guys in the bar, my boss asked me if I had found the store alright. I said that I had and had gotten only a few street comments in the process. Astonished—he actually pulled back in surprise—he said, “They would dare!” Now it was my turn to be surprised. What did he think would happen?

What I suggested to him is what I would suggest to any man who doesn’t understand this whole issue. Go out onto a city street with a female member of your family. Walk behind her, close enough so you can hear what’s said but not so close that you seem to be with her. Then watch and listen. You may not like the fact that skeezy men feel empowered to put their greasy attentions on her. To comment on her body. To ask her to smile at him. To whistle and cat call at her. To describe what sex acts they would like to perform on her.

Well, get over it because we don’t like it either.

Or, if you’re feeling particularly aggressive, go confront the harassers. I would pay money to watch that.