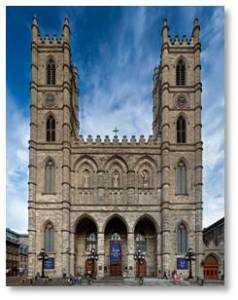 When I first went to Montreal as a child, our parents took us into several of the city’s churches. This seemed perfectly natural as we were Catholic and so, seemingly, was most of the city’s population.  How things have changed since then.  For a variety of reasons, which I noted in a previous post, few young people in Quebec Province are now Catholic and most, as I was told last week, don’t even bother to get married.

Yet the 26 churches of Montreal remain, even if they are mostly empty. On our mini-vacation, Seth and I visited three religious buildings and had different reactions to them.

First, a few definitions:  Catholic ecclesiastical structures include churches, chapels, basilicas, cathedrals and oratories.  What separates one from another?

Okay, now that we’re clear on the terminology, here’s what we saw last week.

We went through this church at the beginning of Monday’s walking tour of Old Montreal. It faces the Places d’Armes and is the second church in that location. Notre Dame is an amazing building—Gothic Revival in architecture but with vivid, almost gaudy, interior decoration.  Like most of Montreal’s churches, it’s built of the native gray limestone, which is dark and somewhat gloomy, even on a sunny day. The difference between Notre Dame’s  gray medieval exterior and the gorgeous saturated colors of the interior is stunning. 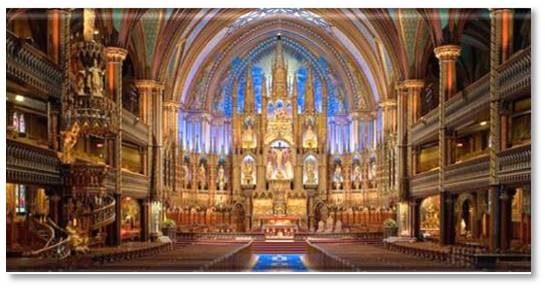 The sanctuary is filled with hundreds of intricate wooden carvings and religious statues while the ceiling is painted deep blue with gilt stars scattered across it. The eye is engrossed by shades of blue, azure, red, purple, silver and gold. The stained-glass windows show not the lives of the saints but the history of settlement in Montreal.  There is so much detail one almost doesn’t know where to look first.

It’s a beautiful building—but that’s all. It awed me in the way a museum full of masterpieces does but I got no sense of spiritual presence in Notre Dame. Perhaps we didn’t spend enough time—one could easily devote an entire afternoon to appreciating its beauty—but I don’t think that would have made a difference. 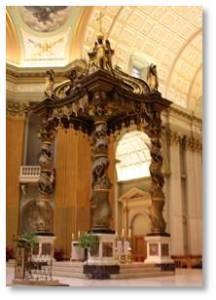 The cathedral of Mary, Queen of the World was very different. We stopped here on our way to the Montreal Museum of Fine Arts and I was immediately taken back in time.  Our mother had wanted to visit the cathedral because the structure is a scale model of St. Peter’s Basilica in Rome.  She probably knew this was as close as she would get to the original.  It’s difficult to scale down a structure the size of St. Peter’s and the cathedral’s exterior is, as a consequence, somewhat squashed and less than successful architecturally.  The dome is impressive, though.

Inside is the feature I remember most clearly—the baldachin or canopy over the altar. This is also a scaled-down version of Gian Lorenzo Bernini’s baldacchino in St. Peter’s and it is impressive.  Completely hand made from red copper and gold leaf, it has the same twisted columns as Bernini’s, topped by a canopy that holds angels, garlands and the papal insignia.

Despite its position as the bishop’s seat, we felt no particular spirituality in the cathedral, either.  It is an interesting building that holds paintings from Montreal’s history and we appreciated it as such. Then we moved on.

I remembered three things about visiting this structure so many years ago: it was on top of a hill, it was big, and I could put my hand on the reliquary that held the heart of Frère André.  (What kid wouldn’t remember something like that?) It was a beautiful sunny morning when we drove up Mont Royal and I realized just how big the oratory is.  What I had forgotten was that getting from the parking lot to the front door is a workout. 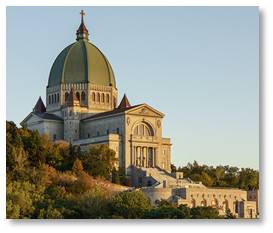 There are several sets of steep steps to climb and I had begun the first set when I saw two young men watching us as they caught their breath halfway up.  I wanted to show them that gray-haired grandparents can be strong so I powered my way up to the first landing.  It was tough but doing it gave me some satisfaction.

The oratory is the life’s work of Saint Brother Andre, a modest and unassuming priest who was canonized in 2010.  Here in the oratory was the spirituality we had missed in the other buildings. The presence of this simple man can be felt in the grand sanctuary, the crypt church, and Frère André’s chapel.  It’s not a big overpowering thing, just a soft sense of peace and love that emanates from an enlightened soul.  As we wandered through the various buildings, we could feel that peace suffusing us. 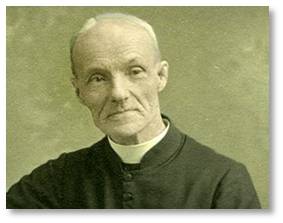 Saint Brother André’s heart is still there in its reliquary, although you can’t touch it any more. Opposite it are three rooms in which he spent a great deal of his life. These rooms were taken apart and removed from their original locations, then reassembled at the oratory so his presence is strongest there.

It wasn’t conscious, like getting jolted by static electricity. Instead it feels like having touched—or been touched by—something important, something beyond the ordinary. It’s ephemeral but it stayed with us long after we left.

That’s the difference. We went through three buildings dedicated to spirituality but found the spiritual in only one. Size, ostentation, art, decoration, expense, and even great beauty can’t equal the impact of one human being who understands the power of love.  Even with the best of intentions, you can’t build it, buy it, or paint it. The power of love has to come from the human soul.